India, time for a definitive new course to real progress?

During the first two weeks of the year I have been travelling extensively across India with my friends and colleagues Samit Naik and Walter Sciacca (co-authors with me of the upcoming book ‘Fast Track Innovation’ www.fasttrackinnovation.it ; lots of the traveling was relevant to interviews and meetings that will be featured in the book itself ). We have spent time in several cities and we have had the opportunity to observe many things that are currently happening in India perceiving clearly a momentum for change in progress. Prime Minister Modi has coined a slogan “Make in India” focusing on the fact that manufacturing needs to get back to actually boosting a concrete economic growth. For example, companies as Mahindra (automotive) point out that this is actually happening by advertising on main national newspapers the production record that they achieved amounting to 5.000.000 units. 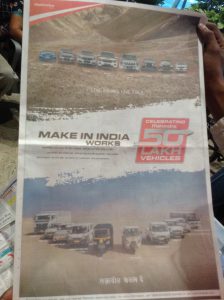 In addition, the educational context directly related to economic development is growing at full speed with companies clearly seeking higher level skills and talents. The focus in not only on technical subjects but also on managerial and economic ones signalling the concrete drive for an overall industrial and organizational growth. 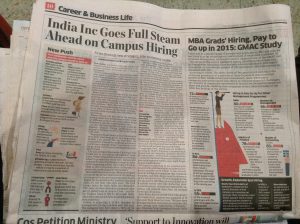 January 2015. Organizations in India recruit at full speed on campuses

There is no doubt that something is happening; change is in the air and its progress is gradually perceivable. We have had several meetings with business people in various sectors and organizational contexts and all of them pointed in this direction. Yesterday even The Times of India has published an article highlighting the same trend  “India’s growth to reach 6.3 per cent in 2016: UN report” .

Prime Minister Modi is perceived has the energetic and focused leadership driving and stimulating these changes. I am currently enjoying reading his recently published biography by Andy Marino “Narendra Modi. A political biography”, pointing out that “innovation – doing things better and smarter – engages and animates him”. 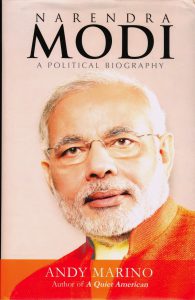 I invite everybody to get more acquainted with the way he developed his path to political prominence and is currently implementing organizational and managerial policies. The focus is set to giving the opportunity to public servants to discover and give their best rather than getting stuck within the same dynamics of stale bureaucratic routine. A kind of routine that is too often double knotted in corruption practices representing a heavy cultural and practical burden to economic development.

For good or bad, this is represents a new way to frame and manifest the organizational role of government to the concrete development of a country. No matter what kind of progress actually happens in India, or the speed of it, many of the actual managerial practices Modi utilizes over the inner working of government should be closely analysed by many other countries. Let’s stay tuned to closely observe trends, facts and outlooks.